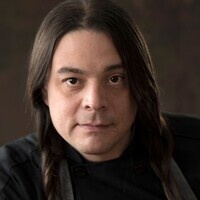 Chef Sean Sherman, Oglala Lakota from the Pine Ridge reservation, is the founder of the company The Sioux Chef. In 2014 he opened his business The Sioux Chef as a caterer and food educator to the Minneapolis/Saint Paul area. His focus quickly became providing catering, cooking classes, speeches, and demonstrations. In 2018 Sherman’s first book, The Sioux Chef’s Indigenous Kitchen, was awarded the James Beard medal for Best American Cookbook as well as the 2019 James Beard Leadership award.

Through his research, Sherman has uncovered and mapped out the foundations of indigenous food systems through an indigenous perspective. He has become renowned nationally and internationally in the culinary movement of indigenous foods. With an ever growing team of decolonized-minded peers, he is leading a movement to completely redefine North American cuisine through the understanding and utilization of indigenous food knowledge. This is an evolution of Native American Foods, taking important educations of the past and applying them to the now.