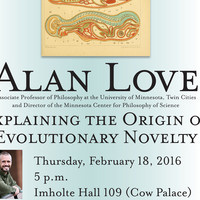 “Explaining the Origin of Evolutionary Novelty”

The origination of novel structures has long been an intriguing topic for biologists. Over the past few decades it has served as a central theme in evolutionary developmental biology, in part to highlight explanatory gaps in the population genetic framework of standard evolutionary theory. Yet, definitions of evolutionary innovation and novelty are frequently debated and there remains disagreement about what kinds of causal factors best explain the origin of qualitatively new variation in the history of life. I argue that instead of trying to identify a single, correct definition of evolutionary novelty, biologists should shift their attention from defining the concept to characterizing the explanatory agenda associated with the concept. The meanings of the terms “innovation” or “novelty” serve to indicate explanatory expectations for the study of diverse morphological or behavioral features. These differences in explanatory expectations or criteria of adequacy help to account for disagreements about how best to explain the origin of novelty. Thus, advancing inquiry into the developmental evolution of novel structures requires attention to three distinct dimensions—conceptual, empirical, and theoretical—and suggests that combinations of philosophical and scientific expertise harbor the most promise for increasing our understanding of the evolutionary origins of novelty.

© 2022 Regents of the University of Minnesota. All rights reserved.

This event content is powered by Localist Event Calendar Software.