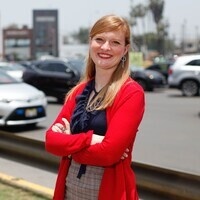 From Rural to Urbano: Morris as a Stepping Stone to a Life Abroad

Katrina Heimark has been a researcher and professor at the Universidad de Lima in Peru since 2018, where she studies the relationships between citizens and the police. Katrina grew up on a farm in rural Minnesota before pursuing Political Science, English and Spanish majors at UMN Morris. As part of her undergraduate education, Katrina decided to study abroad in Peru, an ultimately life-changing decision. After graduating in 2009, Katrina moved to Peru where she discovered her love of teaching. In 2012, she began graduate studies in political science at the University of Minnesota, with the aim of eventually becoming a college professor. Katrina’s doctoral dissertation, which she will defend this year, examines why individuals turn to the police in contexts of widespread mistrust and skepticism of legal institutions.